Lakers News: Kobe Bryant Believes He Would Have 12 Championships If Shaquille O’Neal Was In Shape

In their time together on the Los Angeles Lakers, Kobe Bryant and Shaquille O’Neal resembled one of the NBA’s greatest duos of all time and one of the best ‘what if’ stories.

Despite the fact Bryant and O’Neal won three consecutive championships and could’ve won a fourth, it’s often discussed what could have been had they liked each other — or at least if they could’ve tolerated each other a few more seasons.

Even with all the angst and fighting between them at the time, they still went on to create a dynasty. And now 15 seasons after O’Neal’s departure to the Miami Heat, the two have seemingly found peace with one another. Bryant attended O’Neal’s statue reveal at Staples Center in 2017 after the latter attended the former’s final game in 2016.

However, even after all those years and the two becoming somewhat of friends, they still refuse to resist the temptation of talking trash towards one another in the media. Bryant started this mini-battle by saying that if O’Neal had stayed in shape, he would currently have 12 championships, via Valuetainment:

This is not a new criticism from Bryant as he has always said that O’Neal’s work ethic wasn’t to the level that he wanted it to be. O’Neal responded to this by simply stating that if Bryant had passed more in the 2004 NBA finals against the Detroit Pistons, he might have those 12 championships, via Reddit: 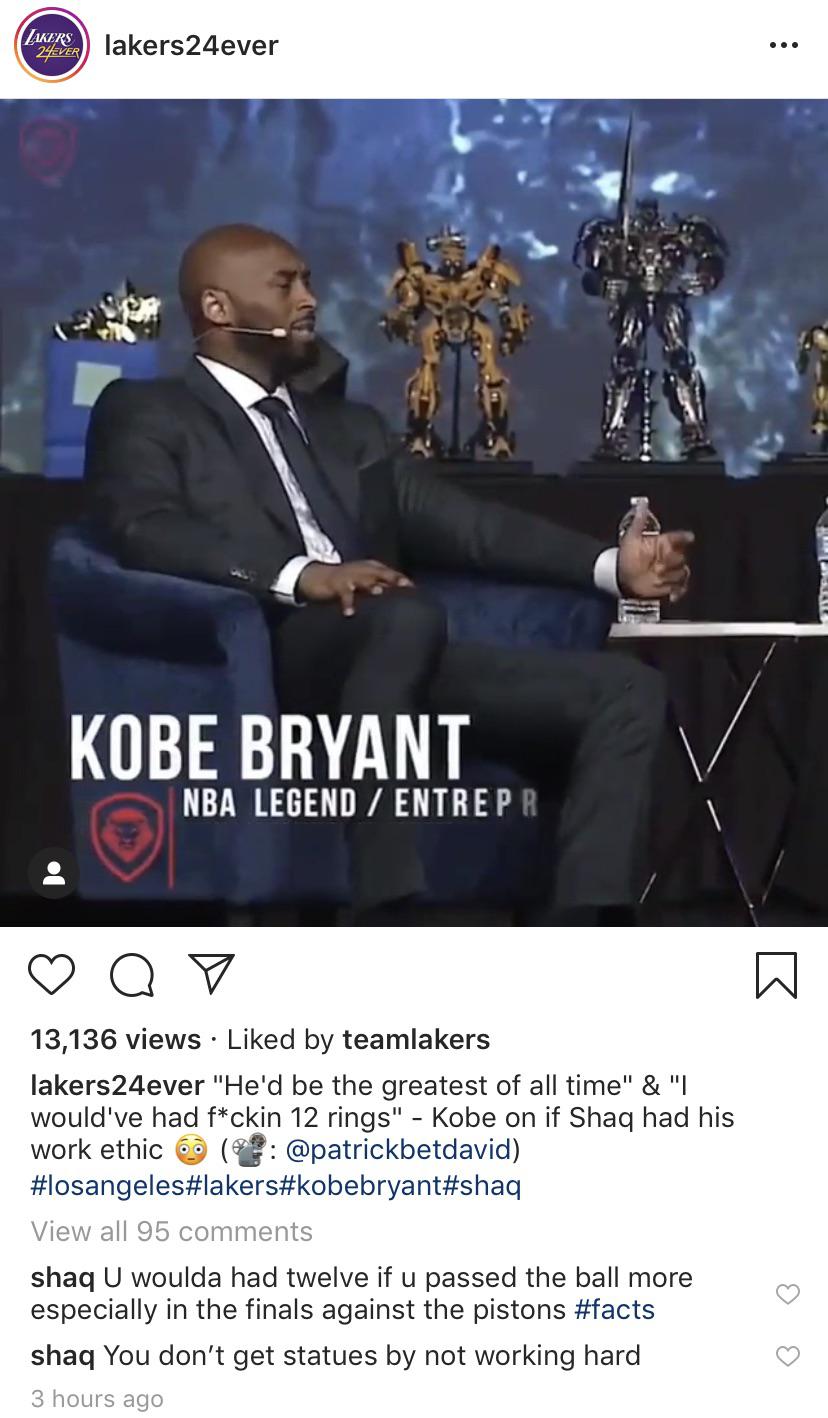 Normally, this call and response from the duo would lead to a firestorm in the media. Luckily, Bryant was able to get to this one quickly and dispel any rumors of ongoing beef with two tweets. He first called O’Neal the most dominant ever and then followed it up by saying there’s no beef despite how much the media wants it, via Twitter:

Don’t get it confused. He was still the #MDE

There is no beef with @SHAQ I know most media want to see it but it ain’t gonna happen. Ain’t nothin but love there and we too old to beef anyway #3peat

It’s all good bro, when I saw the interview, I thought you were talking about Dwite, is that how u spell his name lol

As it almost always is between these two now, this is just another bout of playful jabs between two all-time greats. They’re both fully aware of how much their beef still is talked about in today’s game and have no problem playing around with that.

Luckily, both remain huge Lakers fans and want nothing but the best fo the team. Perhaps this new-look Lakers team can put it all together and win them their first championship since the Bryant-Pau Gasol era.

Giannis Antetokounmpo is viewed by many as the best player in the NBA today. The…

With the 2020 NBA All-Star break in progress, the Los Angeles Lakers and other…